Hear Karen's radio interview with Katerina Stoykova-Klemer, aired on WRFL, Lexington, KY about her book The Woman of La Mancha.

The Saved Man Series, Book I 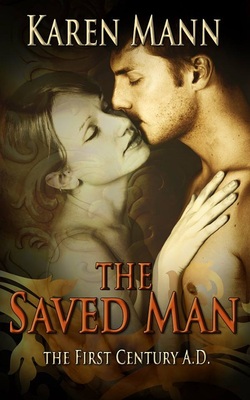 Four young men find themselves immortal in the first century A.D., the time of the Emperors Augustine, Nero, and Caligula; of Jesus; of the fall of the Jewish Temple; and of end of Pompeii. Each man loves a woman beyond reason. What will happen as they realize their lovers will die and they will not?

Join Daniel Lockheart in the 21st century, as he unravels the 2,000-year-old story of Lucas, Alexander, Justus, and Mattius.

The story opens when a man is stabbed just outside Daniel Lockheart's apartment. Daniel takes him home and discovers the wounded man is Lucas, a saved man.  finds a saved man in his apartment:

How could such a wound only be taped, its own sort of package, closed and secret? Daniel’d seen how deep it was. His thumb would have plumbed the depth through the skin and muscle and entered the liver. Yet, he knew—if he could believe his eyes—he knew who this was.

“Gwen likes it when I visit her.” Like a violin, Lucas’s voice came, light and easy. Gwen’s apartment was across the hall from Daniel’s in the brick apartment building—a two-story fourplex, split in half by a long hallway. Gwen lived with her daughter, Hannah. “We were married. Once.”

Daniel rubbed his forehead: Gwen was ninety; Lucas was his age. Daniel reached into the desk drawer—the one Lucas had left open. From it, Daniel pulled a cigar box. It contained a dozen or so newspaper articles, all laminated, from publications spanning the last three centuries.

“Quite a collection,” Lucas said, as he shuffled through them. He replaced them in the box, the box in the drawer.

Daniel’s lips compressed; his forehead furrowed as he walked between his stacks of newspapers and magazines to a solid bookcase on the opposite wall. From a shelf he pulled a large, old book. The title on the slightly warped cover was Legends of the World. The spine creaked as he opened it. The pages were dotted with age spots, but the paper was smooth, high quality of a long ago time. He read aloud: “The Saved Man: Legend has it that at the Crucifixion Jesus demonstrated ultimate forgiveness by giving eternal life on earth to a man, maybe more than one.”

“Yes.” Lucas, now beside Daniel, quoted from the Bible, “‘. . . the Son gives life to whom he is pleased to give it.’ You know, that’s why Jesus came.” He grinned, an ironic grin.

Patting his chest, Lucas said, “Evidence to the contrary.” Finished with the topic, he looked around the apartment.

Rising from the couch, Lucas stood by a window near the desk. His rich baritone voice inter-rupted Daniel’s thoughts. “I would not want to be a research specimen. Or to be looked upon as a space alien or a merman.” Yet Lucas knew he had the advantage of Daniel’s isolation and lack of ambition. “You seem settled. I will tell you my story.” He pointed to the computer. “To write down.” He leaned against the desk and crossed his arms, as if settling down for a long chat. “It’s time to set it down.”

Daniel considered the opportunity that Lucas was offering him. A one of a kind story, an impossible story, yet true.

Why not? Things had not worked out with Trina, even though he had tried very hard. He loved her very much. He sighed and returned to the present. Here’s something that might give my life purpose.

Lucas spoke softly. “I could get the others to help.” He paused. He had not seen Matt or Alexander or Justus for many years but he would have no trouble finding them and bringing them to Daniel’s apartment. Would they be as willing to share their story as Lucas was? But he had decided. “Yes, it should be everyone’s story. Not only mine.” Lucas had been conscious of his skin zipping itself back together, faintly sounding of Rice Krispies in milk. The slash was fully healed.

Read about Karen's historical novel, The Woman of La Mancha, which is a companion book to Don Quixote and tell the story of Aldonza/Dulcinea, the young woman Don Quixote idealizes.

“And so, to sum it all up, I perceive everything I say as absolutely true, and deficient in nothing whatever, and paint it all in my mind exactly as I want it to be. . . .”
Don Quixote, Volume 1, Chapter 25

Order books by Karen Mann
from amazon.com, The Saved Man