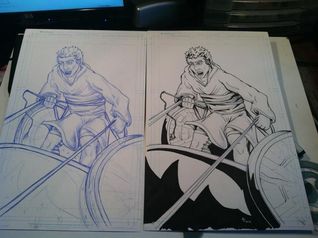 Lucius Flavius Artorius Valentinias, son of Artorius and Valentina, born in 7 A.D., becomes immortal through an act of grace and truth at the age of 26. Lucas champions the underdog, a fair man, interested in the pursuit of knowledge. He is faultlessly loyal to his lover, Ecatya; his family; and his friends. He is six feet tall with dark curly hair and gray eyes. A chariot-racing champion, he is admired by everyone and women find him irresistible.

Supernatural ability: keen hearing and teleportation, the ability to step through space from one place to another by skipping all the points in between.

Excerpts of Interviews by Daniel Lockheart

When I was twelve, my father took me to Rome to the chariot races. I had been to ones in Caesarea and in Sebaste and Tyre, but, you know, nothing like Rome, the Circus Maximus. I followed around my father and my uncle, Primus, who helped with the business. But I knew nothing or it seemed as if I knew nothing. Though in reality I knew a lot as I’d been listening to my father all my life. I’d been around horses and racers and chariots all my life. But nothing prepared me for the numbers of people in the circus, for the coarseness of the racers before the race began, for the noise and smell, and dust and chill of the stone. The mist from the horse’s nose after the race, his heaving breathing; the unconquerable laughter of the winning racer.

I can’t even explain it. I was frightened because for the first time in my life I felt as if I counted for nothing and I did not like it. Who would have guessed I would ever have felt like that, the first son of my powerful father. I was not one, you know, to want undue attention. I was not one to grab attention or power. I only wanted to be me and do what I wanted and have what I wanted, which was not power or attention but horses and racing and surety and excitement.

When I look back over the centuries what excites me about having lived them is what I know because of having lived in them over the years. I love, you know, the years I’ve spent with my Ecatya soul, so those are the highlights but they are rewards to the other years too.

My father. I hung around him every chance I got. I learned everything this he knew about horses and racing. I learned fairness and openness from him. I learned how to be a man from him. And I still, after two thousand years, act in ways that I think would make him proud.

Mattias: Lucas and Alexander. Because they changed my life. I learned kindness from them. Not that my parents weren’t kind, but I mean kindness to strangers, and Alexander gave me hope that I could live without struggling to breath and without pain. His simple touch, putting his hand on the back of a lad made a lot of difference. It was Lucas’s idea for Artorius to adopt me so I can marry Demetra for the first time and that is the memory that gives me the most hope—that I will find her, that I can have more time with her.

My father was the same with me as he was with Alexander—talkative and always telling me things, so I learned a lot from him but I was always sharing him with someone or something else, and our mother would not share him so we did not have much time together as a family, except at meals, always at meals, A very important time. As I got older, I spent more time with him with the horses and racers. I learned and listened. I was fascinated by every aspect of chariot racing. I wanted to be out and on the move. I always liked to exercise. I swam daily and ran daily. I worked in the stables and on the grounds too so I was strong. I knew every laborer, servant, and slave. And I knew what they were good at. I learned to talk to them. When I took over, I rearranged things and moved people to make things work better. I always wanted to “know” and I didn’t care much what it was—there was always something interesting in it—still I liked the horses and the thrill of racing the best. I liked for a fleeting moment, well those quick minutes, believing I was a god, that I was immortal, maybe I was practicing.

But I was going to tell you about my mother. She told us stories from history that’s she’d heard from her grandfathers and ours. I never knew our great grandfather, who helped capture Spartacus and crucified slaves the whole of the Appian Way, and so mother would tell us the stories she must have heard over and over. Our father remembered him. It was easy to know that our destiny was to serve Rome.

My mother: She was a small woman. She was a bit frail and after she had me she was glad for father to take up with other women. But I don’t know how much he really did except for Ambrosia, Alexander’s mother. We all knew about her and Alexander. Just as Father told Alexander about us, father told us about him. Mother knew Ambrosia existed and didn’t mind. She had a peace about it.

My mother managed our home and she did it well. She spent much of the day taking care of things that needed to be taken care of. Just managing servants and slaves. But she sat with us by the pool; she played with us, evening hoops and balls; she liked winning. She liked to entertain but we only had dinner parties about once a month or a six weeks. It was a lot of work and she had so much to do. We knew the elite of Caesarea—she had them out to Caeruleus.

I met Ginevra in Rome after our marriage was arranged. Or rather I met her father, then her. He was a senator but he sought to make a good marriage for his daughter. I don’t think he realized that I would take her away to Caesarea. I think he thought he would keep her with him; she was young, 14 or 15, but she was of marriageable age.

It was not so unusual in marriages of business for daughters to stay in father’s houses, but I wanted to have a marriage that was after the model of my parents. So it was not on paper that she would live in Rome and shortly after our marriage, I injured my shoulder. The doctors thought it would heal but they would not let me race for fear of permanent injury or maybe he was secretly a Reds doctor and he wanted  me off the track.

But by then I had the idea of gathering the best of horses and breeding them to make better horses. Ginevra and I traveled for six months and we looked for horses from everywhere. I bought the ones I wanted and sent them to Caeruleus.

Ginevra and I are compatible and we like each other. We have fun together. We enjoy our children together. She is afraid of horses, but she likes the racing, and she likes choosing horses, by the look of them. She is pretty good at it.

She and Flavia watch and consider their bets carefully. She even scouts for me by visiting Quintus Rutilus’s wife. They exchange visits—the children play—but she knows what to look for and listen for and his wife does not. His wife prattles on and on about Quintus and what he is doing. And Ginevra only listens. Certainly Quintus does not know how his wife’s information is helpful to the Blues.

Pompeii. So many, you know, at one time. Watching them all dissipate . . . go . . . like freeze dried before there was such a concept . . . and I knew I was not going to go. I wanted to die with them. I hoped that was the end of my world. And watching all of my line go and saving Alexander’ Marcellus . . . I was happy for him, that he did not have the same sadness that I did, but it seemed unfair—that we could have each had one left to carry on the line.

Mattias: The collapse. Losing everyone, my entire family. Demetra, the first time. Then there was Pompeii, where Demetra had grown up, and Lucas’s suffering for the loss of his whole family, all  people I knew and there were many. Demetra, each time. Always a new adventure to get to know her but always inevitably she is going to time. Though I am old, I know that I am only nineteen and there is a measure of life that I can never experience as a human. Having a child and raising him or her, growing old. There are stages of life that while I live them I do not understand them as human but as an immortal.

I love to learn new things. I always have. But I am only patient enough to learn the things that I am interested in. So I am glad that through the years my interests have changed. Or I think I would get very very bored and be angry.

Mining is the hardest physically. It actullly wore me out, and Mattias and I are the hardiest, you know. Well, maybe that’s not true. I suppose Alexander is the strongest but he doesn’t use his brawn. When we were mining, he was a doctor.
What is your secret that no one knows?

My secret is I completely and totally lost my equilibrium with Ecatya and as much as I love her, I don’t like it when I am not mindful of others and their well-being. But I cannot be when I am in the thrall of my love for her.

The readers know that I am prideful and while I can be compassionate, I have a hard time being humble.
Powered by